When it comes to gaming laptops, NVIDIA’s ‘m series’ have been the norm for a while now. For those of you who aren’t familiar with this technology, it basically goes like this: when releasing a new GPU, NVIDIA would often come up with a lesser capable laptop version; so for example the GTX 980 desktop GPU would have its laptop equivalent called GTX 980M; which would offer a considerable downgraded experience as opposed to its desktop equivalent. But no worries, this is all about to change, thanks to NVIDIA’s new Pascal architecture.

The Pascal GPU’s uses the new 16nm Finfet, way smaller than Maxwell’s 28nm finfet from its previous generation of graphics cards. In this case, smaller is better, it means that Pascal GPU’s can contain as much as 15,3 billion transistors; at steep improvement over Maxwell’s maximum of 8 Billion transistors. In other words; we have more processing power, which raises Pascal’s capabilities to a maximum of 12 TFLOPS, almost doubling the 6.1 TFLOPS from the previous generation. In other words, Pascal offer roughly twice the performance comparing to Maxwell, a noteworthy upgrade indeed!

How does this translate to laptops?

Because of the size and efficiency of this new technology, NVIDIA is now able to produce smaller laptop GPU’s which are for the most parts on par with its desktop counterparts. As those graphic cards run at a lower temperature than before, it makes it possible to run them inside laptops, even with their limited cooling capabilities. Sure the previous ‘m series’ did a good job, but their performance was nowhere near as good as their desktop equivalents, and it also made for fairly bulky laptops which ran very hot. New smaller and cooler technology means that it is now possible to incorporate a good graphics card without compromising too much on the size. Furthermore, increased power efficiency means better battery life; and any laptop gamer knows how fast those can get drained so it’s another considerable benefit of this new technology. 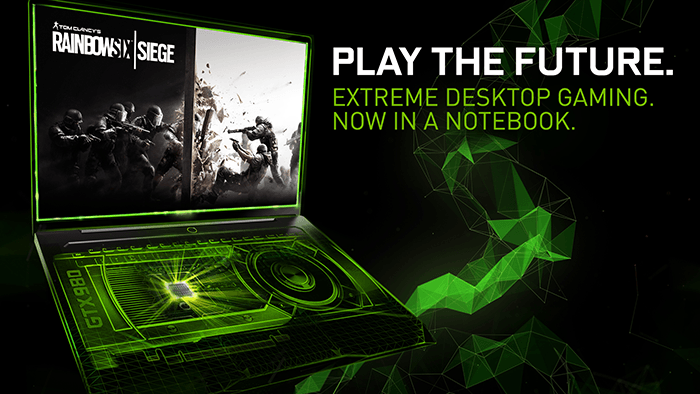 Why game on a laptop?

Gaming desktops are often big machines with a lot of good tech inside of them, and most enthusiasts love to build their own rigs, but not everyone has the time to do that; some of us just want to game without the fuss of being a desktop expert. Furthermore desktops take some room, so opting for a laptop definitely helps those with limited space. And finally the big one: being able to take your gaming machine around with you is an absolute plus; it will make all those lan parties and other videogame events a breeze. No need to use other people’s machines, you can now show up with your own favourite system, no compromises!

Where is it? I want one now.

NVIDIA did launch some GTX 980 notebooks with the previous Maxwell technology such as the ASUS ROG700VO, but this is from the previous generation so it is still pretty bulky and power hungry. Unfortunately when it comes to Laptop Pascal GPU’s, you can’t go to the shops and get yours just yet, but the great news is that NVIDIA is currently working with computer manufacturers to launch new Pascal-based laptops. Recently the guys at Linus tech tips attended a special event in London where they were able to see and test some Pascal based laptops, and the results look very promising indeed. Laptop gaming is about to get its greatest boost ever, and we cannot wait to get our hands on one of those!